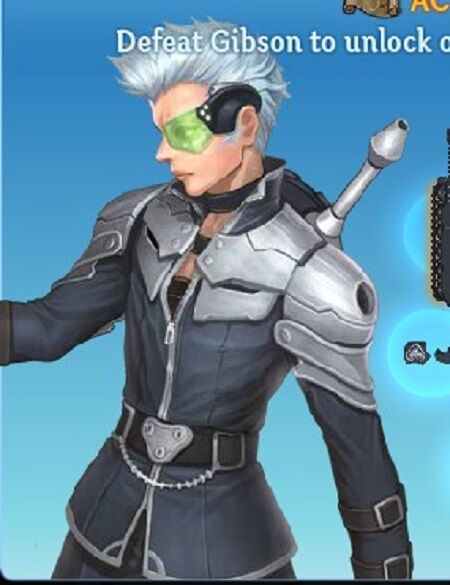 Gibson has great equipment and is the only one who can maximized the character's equip.(We could add Hanzo ,but due to the creators not adding his mask,it can't be complete.Hanzo's mask was once available in the month of August 2012.)Gibson's personality is a charismatic type since he cares about his looks.It can also be noticed just by reading his taunts.

On his greeting to the warrior,he told that he/she can't get this far just by being beautiful like him,because he thinks that this warrior doesn't have any skills.When Gibson successfully defeated the Soul Crasher,he told the warrior that he has brawns that match his beauty.Of course,with a deadly Counter that is called the Pinwheel Chop,he can do a daring somersault that leads to an earth-shattering counter.This skill can also deal full-damage even when the user tags a teammate.But when Gibson is defeated,he told the warrior that he may also misjudged the Soul Crasher ,but he still doesn't admit that this warrior is beautiful.So meaning to say,he wants to be the only one that is beautiful while showing off his deadly skills.

The next up ahead to Gibson is Salacia ,the one who has taken a liking to him.

Each armor piece increases Gibson's Hit points by 3%.When everything is equipped,it increases his Attack & Defense by 10% each.[]

Added Stats:Attack,Defense,and Soul Power by 10% each.[]

Ready:You don't get this far by being beautiful like me,you must have some skill.[]

Win:See,I have the brawns that match my beauty.[]

(I would add up my picture of Gibson,so are the rest of the others,but NO! It's too horrible,and I already uploaded it into the web,but it's just not really cool to look at.But if you want to know I'll give you a hint:Hanzo has another fan-art with loads of infos when you search Soul Crash on Google.Those are my drawings,but it's just not cool back then! D:)[]

Gibson EX with the background of Soul Crashers fighting.[]

Community content is available under CC-BY-SA unless otherwise noted.
Advertisement