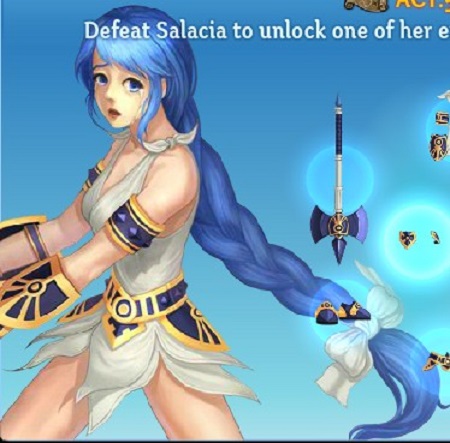 Salacia is the first boss that appears on Act.5:Triumvirate/The Battle.She seeks vengeance because of her defeated loved one,Gibson .

She is the second and also the last Soul Guardian  of Mistral .She has an equipment that increases her Attack and Hit.With an added bonus,her weapon also increases her Hit points once more and Evade Stats.As her weapon says,she symbolizes as a heavenly knight or a humble warrior.Salacia wants to fight the warrior who have defeated the one she love,which is,Gibson .

Salacia does smashes the ground time to time,but there's more than just that.She all has most of the Counter skills except for Whirlwind,Ground Smash,and Spin Strike.(Of course,no boss would ever equip the beginner's skills,since it has many weak spots.)

She then told the warrior that the news that she heard about her fallen Gibson and wants to destroy him/her like what he/she did to Gibson.If Salacia defeats the player,she said that she has successfully tormented the warrior's soul like what he/she did to Gibson,whom the warrior took away from her.But when Salacia is conquered,she is dissapointed that she couldn't avenge her Gibson,but accepts it since now she can join her fallen Soul Mate.Her female counterpart is Allie ,since she cares about her fallen friends,but doesn't have a loved one or Soul Mate.However,her 2nd male counterpart is Hanzo ,since like Hanzo ,he mentioned the character he hated on his taunts,except Salacia mentioned the one she loved on her taunts.

The next boss after Salacia is Sera ,The Soul Guardian  of Aqua .

Salacia's armor piece increases her Attack stats by 7% when equipped.With every equipment equipped,it increases her Hit points by 40%.

Added Stats:Hit & Evade is increased by 35%

Ready:I will destroy you like what you did with my Gibson ,revenge is mine.

Win:I have tormented your soul like you did mine when you took Gibson from me.

Lose:Gibson ,I've failed you,but now I can join you.

Theories About Salacia's Relationship with Gibson[]

Hey there!So I'm gonna tell you about Salacia's relationship with Gibson .Well,more like why Salacia likesGibson (Can't believe I'm saying this,but even though Gibson is...well,gay...I don't know if he's gay,I mean,some of the anime characters have that personality,right?)Anyways,it's...kind of like the one on Hanzo 's theory,so I would explain.[]

====Like Terri ,Gibson 's Chibi-self wasn't in the SC Chibi Wallpaper ,however,like Hanzo 's theory about his explamation on his hatred on Terri,it might also be the reason why Salacia likes Gibson .She became Gibson 's teacher on the past,and was ranked the Level 40 Boss,which is right before fighting Salacia.She might have helped Gibson fought better to be ranked close to her side and will avenge Gibson when he is defeated by the Soul Crasher ,who keeps going unto his/her journey to regain his/her memory.Also,this might explain why Gibson 's Counter is Pinwheel Chop ,which is also one of Salacia's Counter Skills.==== This also explains why Salacia is crying in Anime Form.Course,you did defeated Gibson...

So,what do you think guys?Tell me of what you think about my theory.[]

Salacia showing the event,"First Win of The Day".First win of the day would receive 3 Soul Cash.Lasts up only to 3 days.

Salacia's Almost Full EX Form.This loading screen appeared when Season 5 was finally finished and Season 6 is now live.Of course,the plan for Soul Crash EX is still undergoing by Soul Crash Team. NOTE:This loading screen shows that Gaia was still taking charge of Soul Crash until after a few months,Playplus came and decided to make a change in plans of Gaia's.

Community content is available under CC-BY-SA unless otherwise noted.
Advertisement